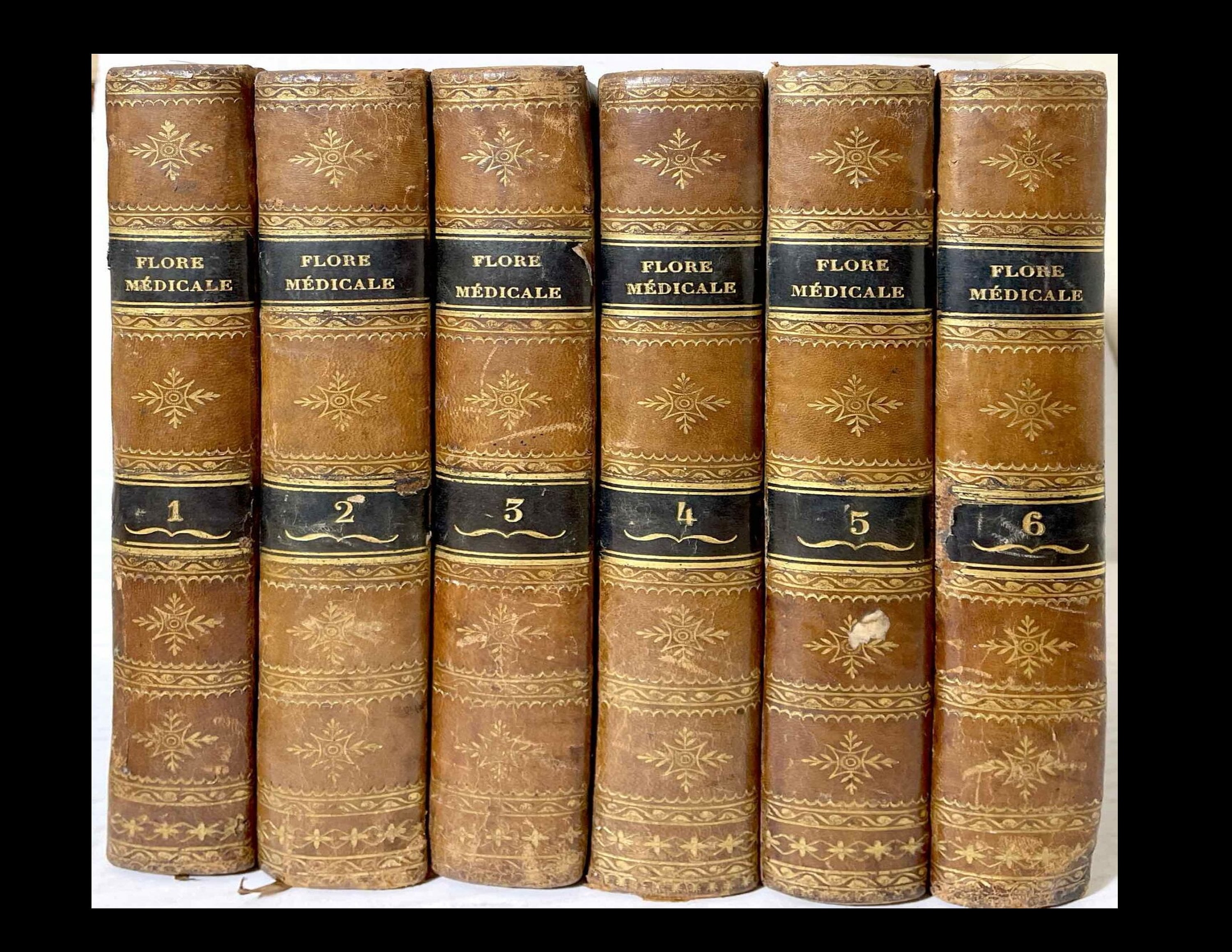 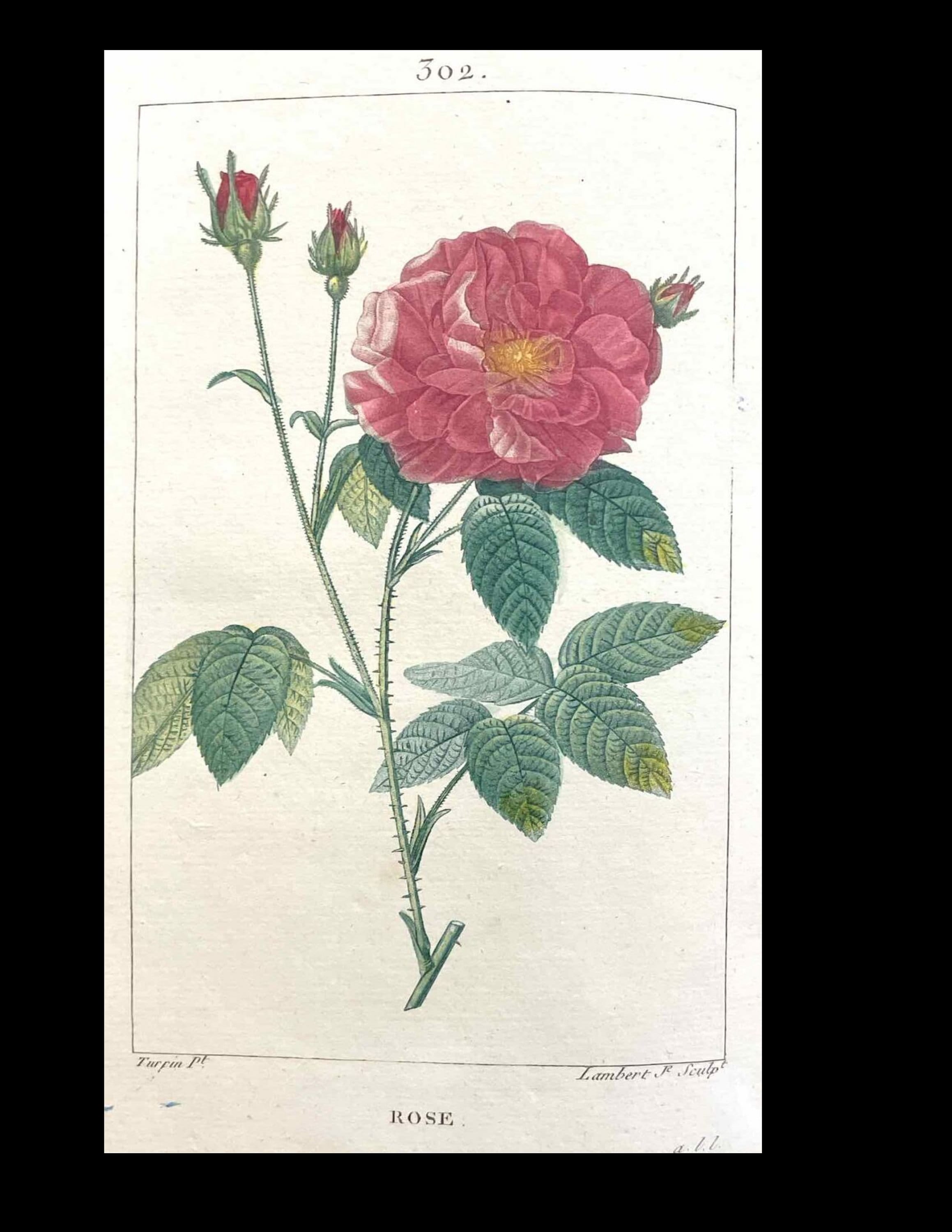 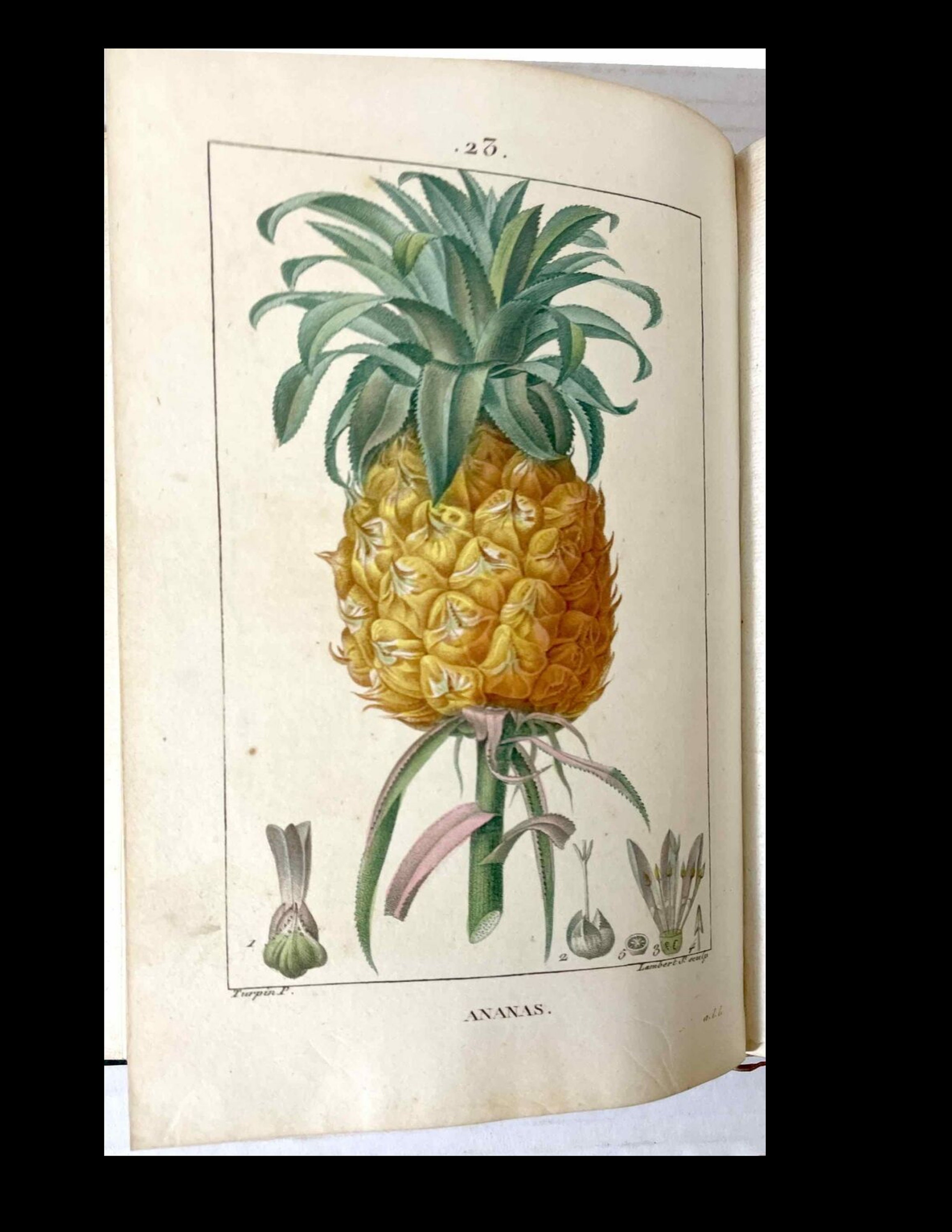 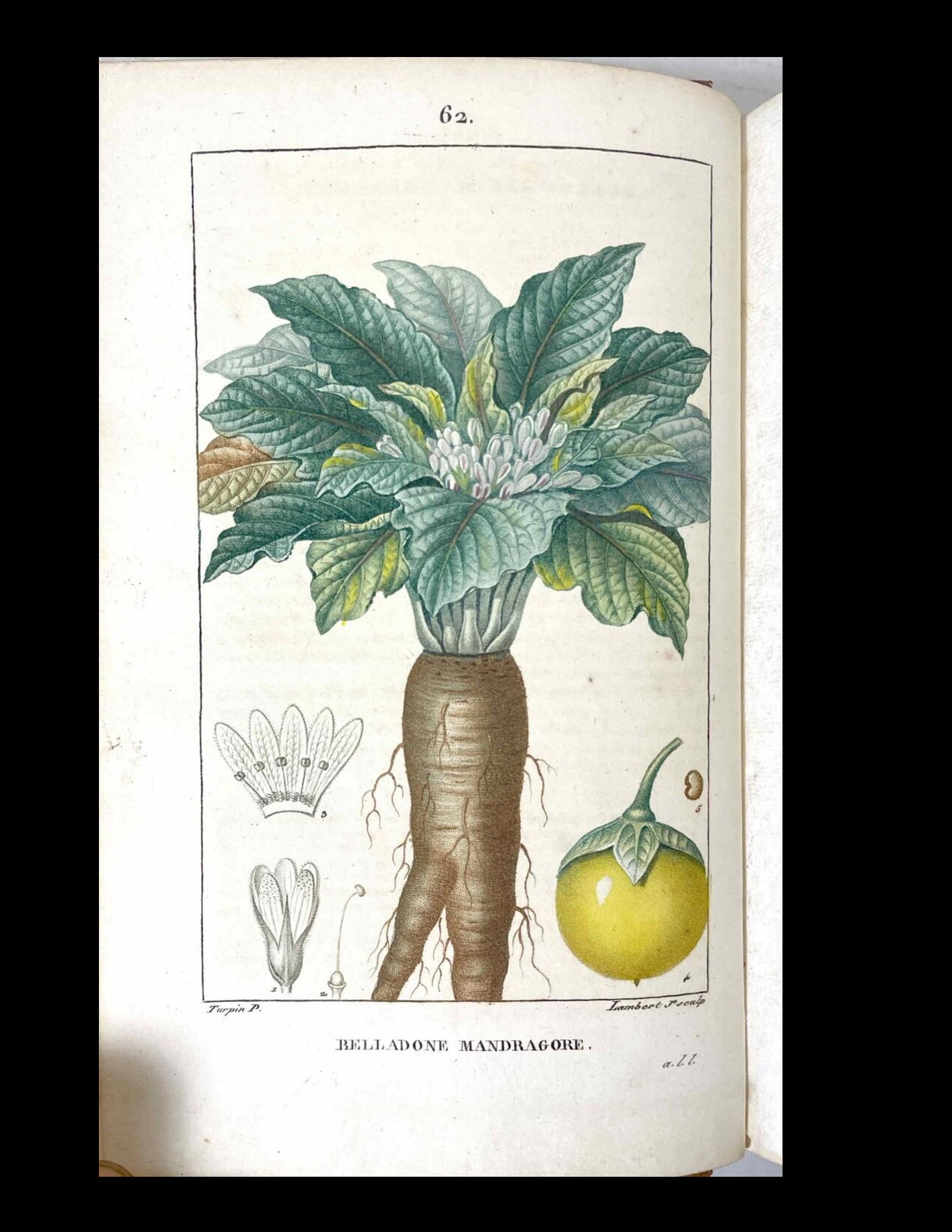 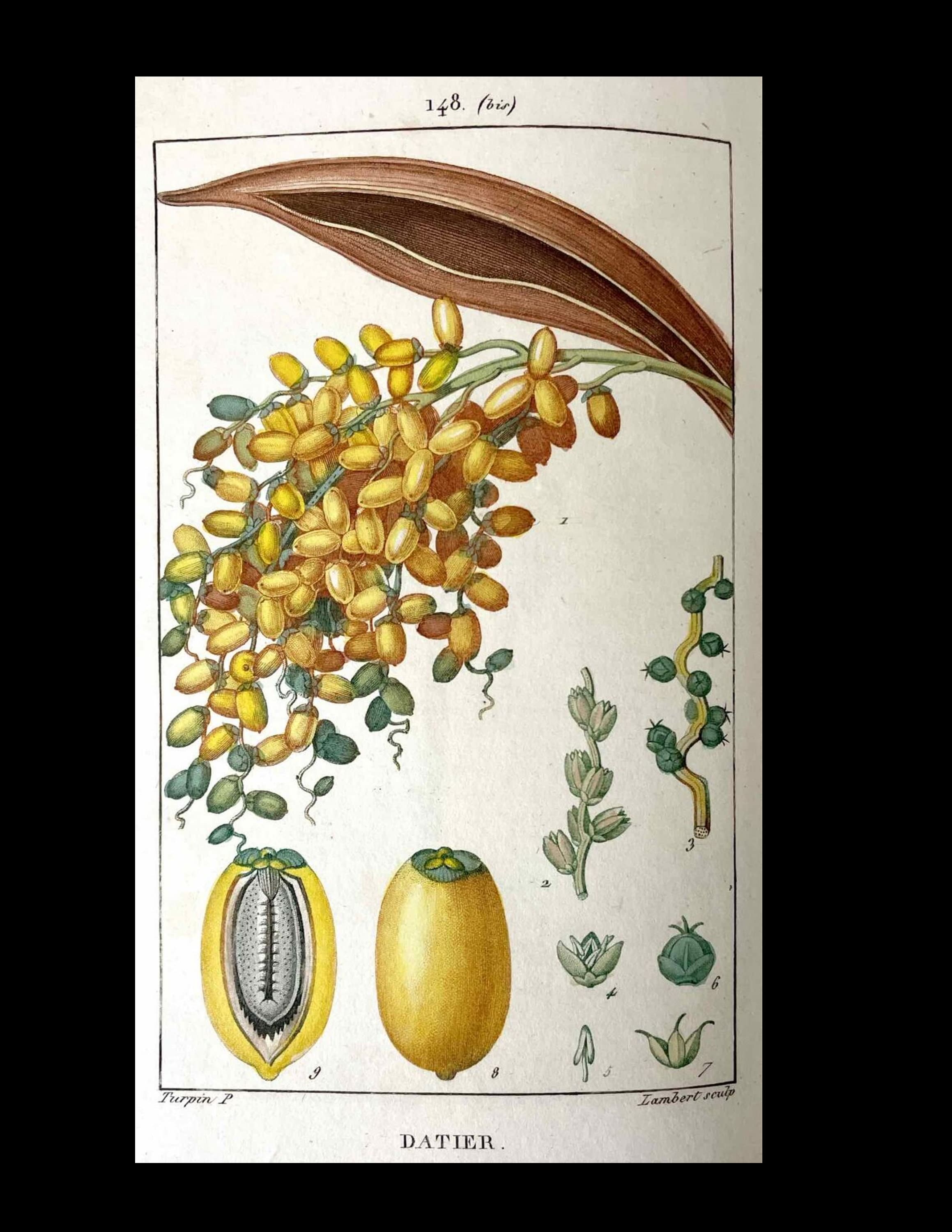 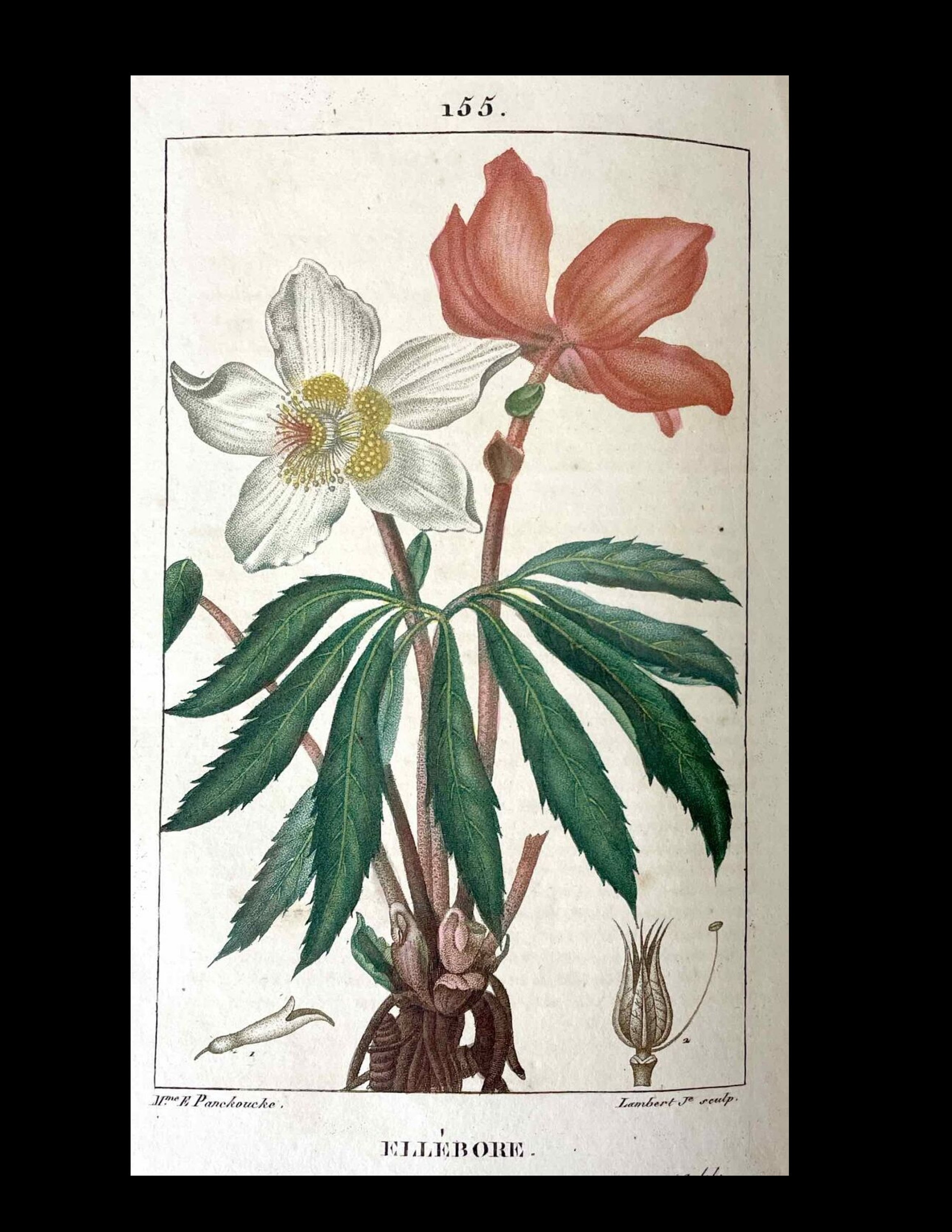 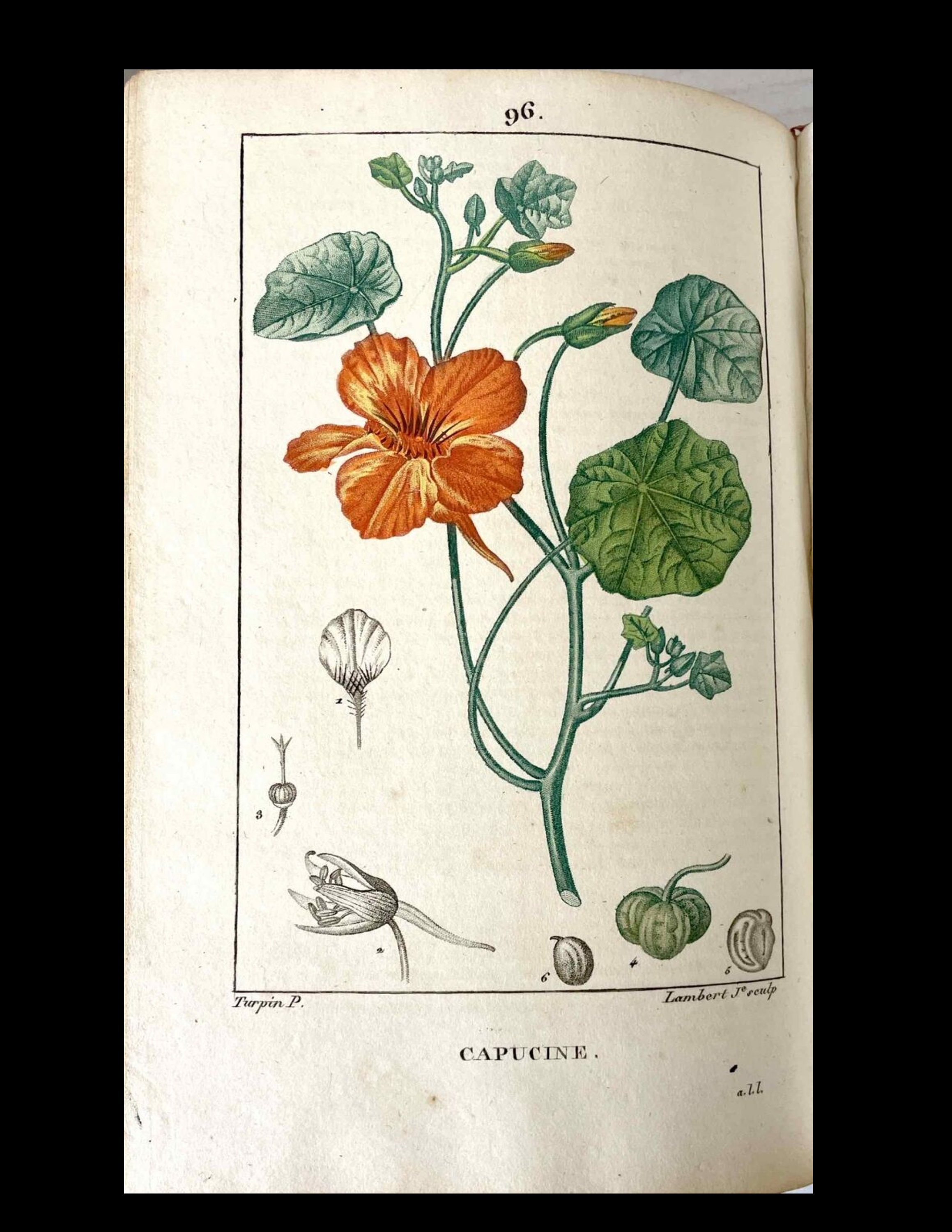 First edition of the most famous flora of the 19th century, admirably and finely colored by Pierre Turpin and Ernestine Panckoucke.


Condition: good condition, slightly rubbed and scratched, corners slightly dented, theft. 2 with two small tears at the front and bottom of the spine, vol. 1, 4 and 6 inside seals with minor tears, pencil notes on each page of text, partially lightly browned with scattered foxing, vol.1: with 7 ff at the beginning with waterstains and after with a hundred waterstained pages at the top . Flight. 2 clean, vol 3 about ten ff with waterstains and 3 plates, Vol 4 clean, Vol 5 clean, Vol 6 some slight waterstains at the bottom of the pages on about ten ff.
Overall a good copy.
Illustrations: 360 color engraved plates.
Volumes: 6 volumes.
Binding: contemporary half-leather, smooth spine adorned with gilt fleurons.
Format: In-8.
Pages: about 1600 pp.
Publisher: Paris, Panckoucke.
Date: 1814 - 1818.


The Medical Flora is the flora of the Dictionary of Medical Sciences, a work in sixty volumes, published from 1812 to 1822 by the same publisher, Charles-Louis-Fleury Joseph Panckoucke. It deals with each of the 350 plants which are the subject of an entry in the Dictionary, of which it adopts the alphabetical classification. With its plates and its more developed botanical description, it completes the Dictionary which insists more on the therapeutic aspects of plants, also approached in the Flora. Subscribers to the Dictionary benefited from a preferential rate for the acquisition of La Flore, the first edition of which appeared in the form of deliveries from 1814 to 1820. Both titles were very successful.
François-Pierre Chaumeton (1775-1819), doctor and botanist, actively participated in the Dictionary of Medical Sciences, to which he contributed numerous articles, and even directed its editing for a time. But his true passion was botany, this "lovable science" in his words. He was the initiator and the main figure of the Flora, of which he signed the “Preliminary speech”. It is his major work. A naturalist and botanist, Jean-Louis-Marie Poiret (1755-1834), and a military doctor, Joseph Tyrbas de Chamberet (1779-1870), joined the writing of the work from the third volume, following the problems of health encountered by Chaumeton.
Next to the plates, the various denominations of the plant are first given, in a large number of languages, most of them European but also sometimes more unusual, such as Chinese, Hindu, Malay, etc. Then come a detailed botanical description, the physical qualities and the medicinal properties, plus possibly the evocation of uses other than medical. Finally the text ends with useful bibliographical references, and the explanations and legends of the plate. The plates systematically show, at the bottom of an overall or partial representation (with foliage, flowers, possibly roots), the intimate morphology of the plant with the detail of the stamens, pistils and ovaries. The fruits are also dissected to reveal, in cross section, the seeds.
Two talented illustrators, both artistically and botanically, are behind the drawing of the boards. Ernestine Panckoucke (1784-1860), wife of the publisher of La Flore, was a pupil of the great flower painter Gérard Van Spaendonck and especially of Pierre-Joseph Redouté. Painter of flowers, with a predilection for watercolour, she exercises here her talent in botanical drawing. However, his participation was very modest (about twenty plates out of more than 350) since almost all the illustrations are by the hand of Pierre-Jean-François‎ Turpin (1775-1840), botanist and remarkable draftsman at the origin of many botanical illustrations, including those of a Parisian Flowers.